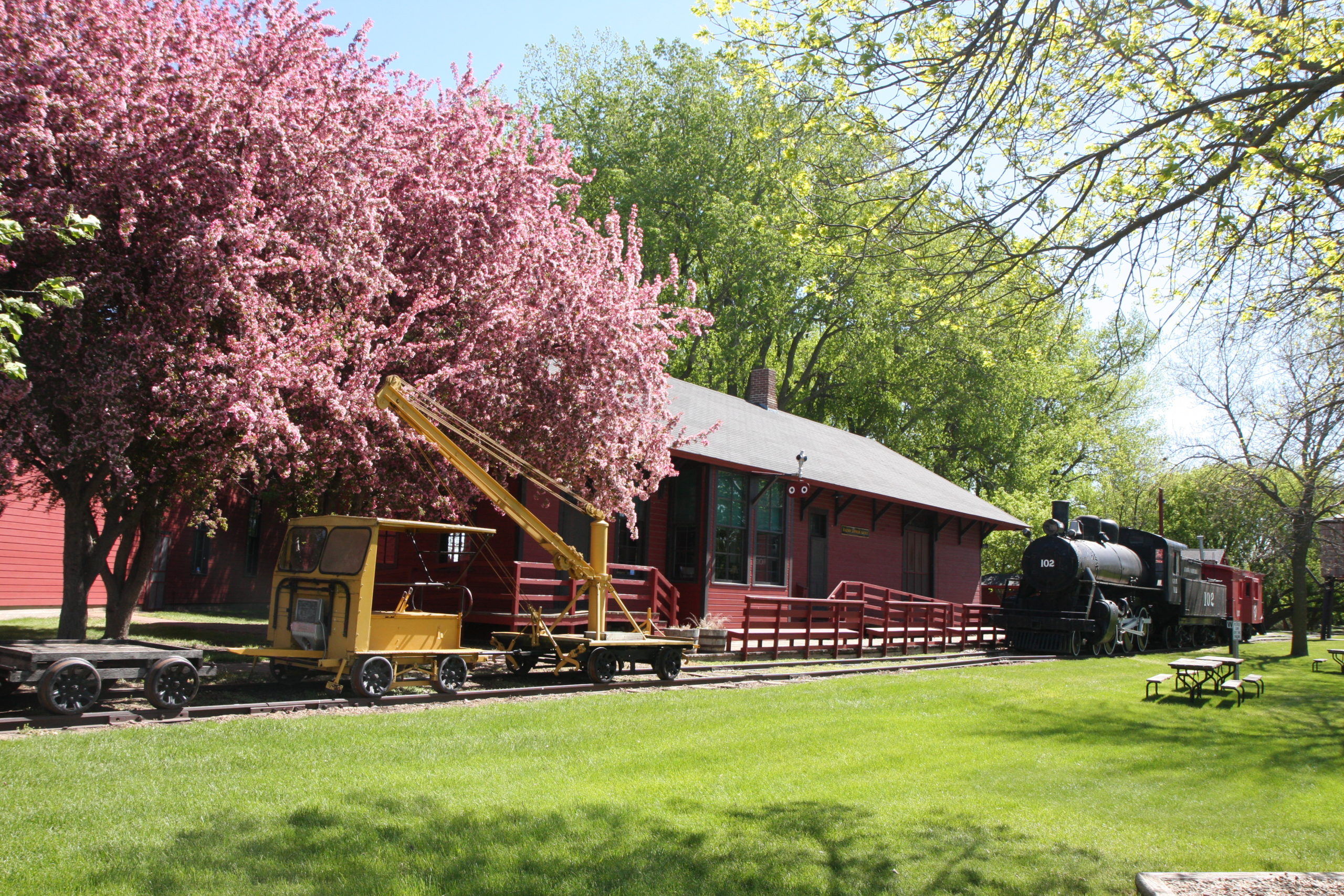 End-O-Line Railroad Park and Museum is a twelve-acre county park, museum, and historic site that features several historic buildings, structures, and rolling stock dedicated to preserving and interpreting the early history of Currie, the Shetek area, and its 20th Century railroad history. Nestled on the northern edge of a historic community, the park is a fun and educational destination for large tours as well as quaint family gatherings. You will be surprised by what you find at this beautiful museum.

Although Currie was the first platted village Murray county in 1872, it lacked rail service for the first thirty years of its existence. Currie’s railroad history began in 1900, when the Des Moines Valley Railway Company of Minnesota completed a 38-mile single track branch line starting at Bingham Lake in Cottonwood County and ending in Currie. The line was immediately purchased by the Chicago, St. Paul, Minneapolis and Omaha Railway—commonly called the Omaha Road; later acquired by the Chicago and North Western Transportation Company. Rumors that the railroad would expand the line further west proved untrue and Currie remained the terminus, aka the “end of the line”.

Because there was only a single track to Currie, a hand-operated turntable was constructed at Currie in 1901 by the American Bridge Company of Chicago. The turntable ensured that locomotives could be easily turned around in Currie and returned them east. The original 1901 turntable was a fifty-six-foot wood and steel turntable. In 1922, due to damage sustained on the original turntable, a longer seventy-foot turntable bridge (formerly used in Pipestone, MN) was installed on the site. This is the turntable bridge that remains today.

The tracks in Currie spurred off four other lines creating a “fork” off the main line. One was to the water tower, sand tower, coal shed, engine house, and the turntable. The other three passed across the road to three former grain elevators, freight line, and passenger line. This is where the original depot once stood. Regular service in Currie began June 1899 halted because of a well at Currie not yet completed. Service returned in August 1899. One train each direction daily.

Passenger travel in Currie reached its height in 1920’s and declined thereafter. By 1928, passenger service was ulimatly ceased by the Omaha Road. By the mid 1950’s no regular agent and only some mixed train service remained. Over the years, the railyards and turntable fell into disrepair. In 1977, the last active locomotive went to Currie and the Currie Branch line was officially abandoned in January 1980.

However, even before the line was abandoned, local interest began to restore the ‘eyesore’ on the north side of Currie. In 1972, a new initiative by the state Minnesota 4-H organization called Community Pride challenged all 4-H youth clubs in the state to develop and complete a project that would improve their local communities. Colleen Illg and Roxanne Probst, two teenaged 4-H members from Currie’s 4-H Club called the Poco-a-Poco Club, advised by adult leaders Louise Gervais and Dorothy Ruppert decided that their club’s project would be to clean up the abandoned turntable at the Currie railyards. For their efforts, they were chosen to represent the county at the state Community Pride Conference held in St. Paul. The club was honored as one of the top eight projects out of 400 in Minnesota.

The following year, the club noticed an ad in the local paper stating that the original Currie depot was up for sale and needed to be moved off the property or it would be destroyed. Gervais and Ruppert instructed the girls to write to the Chicago & North Western Railroad about the depot. Within a few weeks, they had an answer; the Railroad would sell the depot to the club for $1 provided it was moved off the property. It took two years to raise the funds to buy land across the street near the turntable and to move the depot to its present site. The 4-H club leaders soon realized the park was going to be too much for them to handle on a volunteer basis and asked the County Government of Murray County to take it over as a county park in 1975. The county also asked Louise Gervais to be the park’s seasonal director and curator. She would not “retire” from this role until 2010; though she remained involved with the park until her death in 2017.